Here is the short recap of my second race of the season – Tartu Mill Triathlon.

After Valga Valka Helen Triathlon, where we had to race in really hot conditions (it was no-wetsuit swim, temperature in the transition area and in the city was constantly around 36C), I really looked forward for Tartu Mill Triathlon. Weather forecast was promising, ~22C-25C, swim was in the river (temp slightly cold, 17C, but flow was faster than in previous years) and wind conditions were not too bad.
Morning started with usual pre-race meal – three slices of raisin bread with jam. Not sure if it will be enough for IRONMAN race in september, but there is still time to experiment. Important factor was also that I slept better than before Valga, I was more calm and relaxed the evening before.
Stuff was already packed the day before, just had to prepare three bottles of OTE Sports drinks (one with Blackcurrant Hydro Tab, to drink before the race and two with Vanilla Energy Drink to have during the race), check the bike and load all my gear into the car.
I tend to arrive to the event venue even bit too early, at least for me it helps to set the mood and emotions right. It was the same when I shoot the videos and photos and now with competing 🙂
Chit-chat with friends, last minute preparations (number to the number belt and bike), change of clothes, bringing the gear into transition area and it was time to go to the start! We were transported to the start with the busses 30 minutes before the start so we had enough time to put on the wetsuits and have a warm-up in the cold river 🙂
In the start corridor, before entering the water (start was from the water) I tried to position myself somewhere in the middle and the tactics worked. As soon as I was in the river at the startline, the horn sounded and off we went! This time it was a lot tighter than in Valga. First 100-200 meters was real fight – kicking, several tries to swim over me, pushing under water and pulling back. Fortunately I managed to stay calm, tried to position myself to the middle of the river, where the flow was fastest and kept my own pace. With wetsuit I had the chance to swim without the leg kick and it seemed at least for me that it was beneficial. HR was lower, stroke rate was slower, I let myself glide in the flow bit longer and I still moved forward quite fast. And when I was out of the water, my Garmin showed the time – 19:48. I was really pleased! Official time 00:20:39
T1 was OK, wetsuit off, sunglasses, helmet and shoes on, quickly had one gel, little sip from the bottle and off I went.
After Valga I decided that it is time to upgrade the bike and got myself a set of Profile Design 58/TWENTYFOUR Clincher wheels! Of course I tested them before the race but the race conditions are race conditions 🙂 And again I can say that I was really happy with the investment. Avg speed was bit less than 2km/h faster in almost the same conditions as in Valga (elevation gain 160m vs 164m). Overall, nothing really special during the bike leg, pushed quite hard already from the beginning. Cramp feeling in the calves just few hundred meters before the T2 was evidence that I gave almost everything I got 🙂 Official time 01:07:06
T2, no dramas there, just had difficulties with tying the shoelaces 🙂 Again, one gel in, little sip of energy drink, got rid of the glasses and off.
First km of the run was really hard. It was difficult to get the legs moving. The first aid station was near the transition so at first I just had one sip of water and poured the rest of the cup and also the second one to my head and chest. Mostly due to the heat in Valga, I felt that I drank too much and during the last kilometers it was not very pleasant feeling in the stomach. This time I decided to drink reasonably and just took one or two sips in each aid station. For the run I also had two gels with me, but obviously I didn’t plan the run leg very well so I had to improvise with the fueling plan while I ran. Back to the first kilometer – fortunately there were a lot of supporters, Thank You to all of you! So quite fast I got rid of all the bad thoughts and when I looked at the watch it showed that my pace was ~4:55 min/km! Okay, I thougth that I could keep this pace for first couple of kilometers, but when the pace didn’t drop even when I hit the 7km mark, I decided to keep it unil the end, no matter what. During the run leg I even got to cheer the overall winner Rinalds when he passed me on my first lap 🙂
Again, no dramas during the run, kept the pace and even had the strenght to push harder during the final km. Official run time was 00:49:14 and avg pace 4:50 min/km! Really-really happy!
Overall time 02:20:21 and new PB (it was my second olympic distance so no real surprises there)!

Next race will be Sprint in my home town. Since I don’t have so much speed, the sprints are not really for me, but I will participate for training purposes – I need to work on my transitions.

Big thanks to all my supporters – Jooksuekspert, OTE Sports, Bigbank and Moomoo Cycling!

Bike gets the much wanted upgrade! 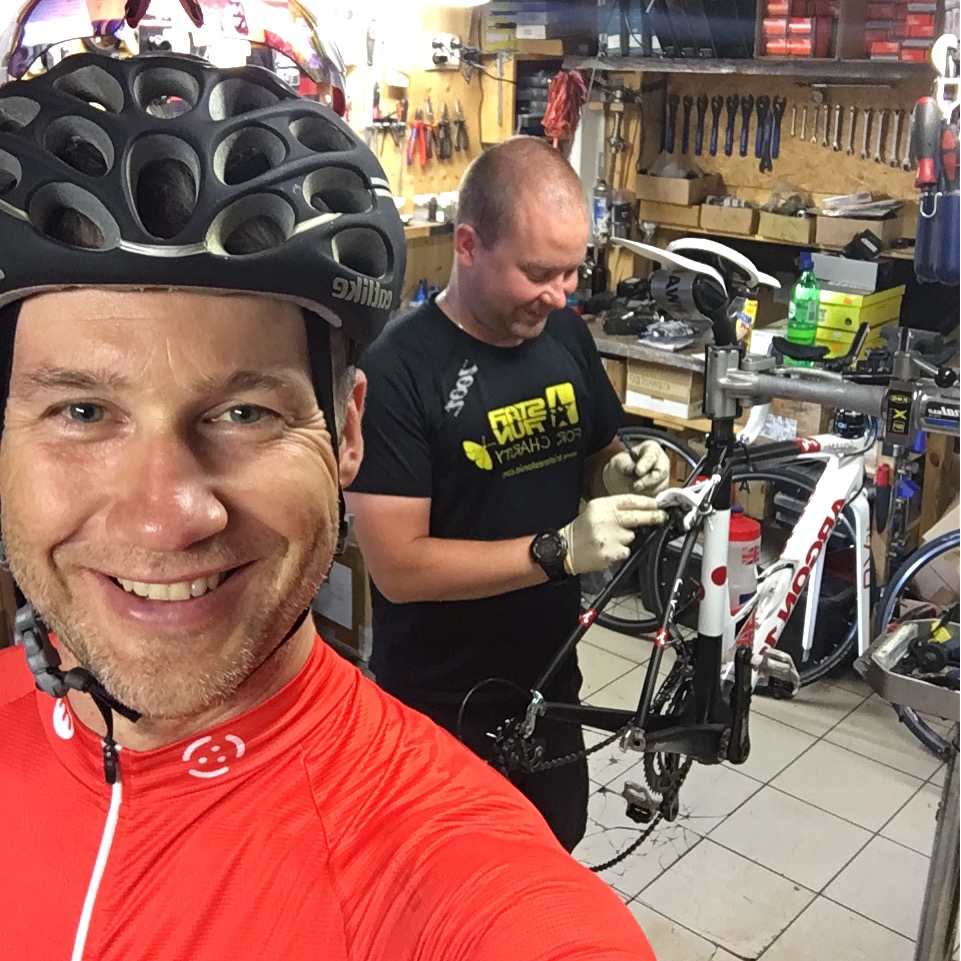 New running shirt as a present from my wife! 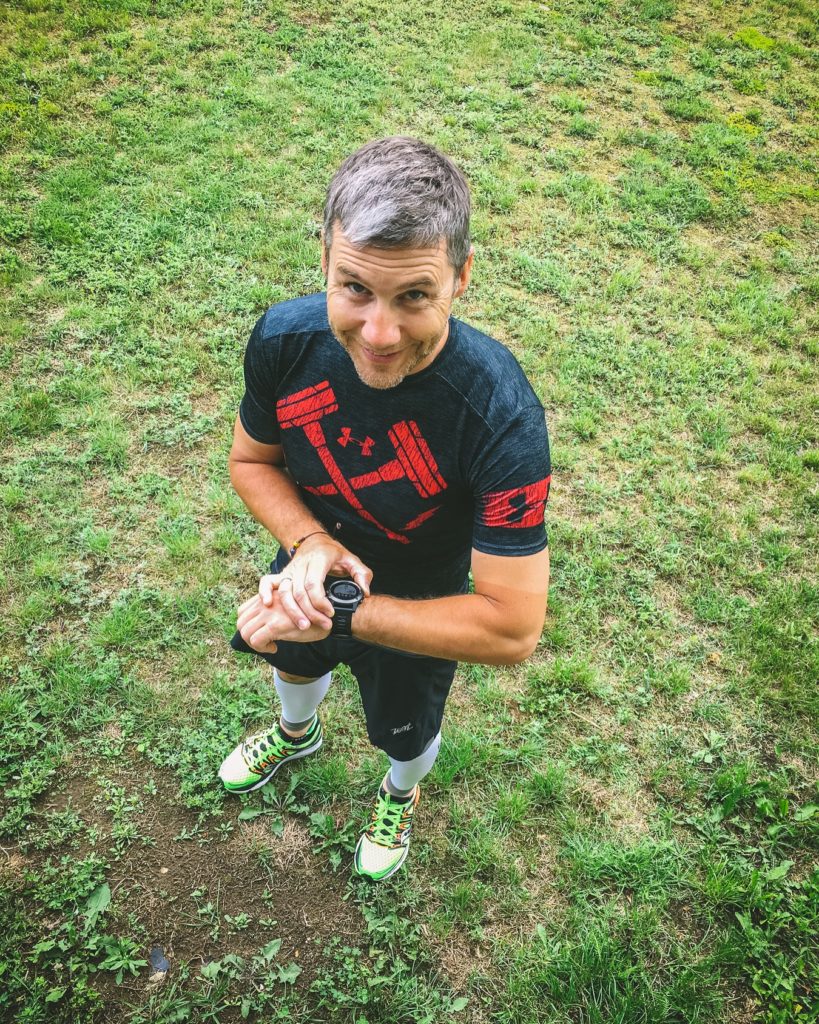 Evening swim in my “home lake” 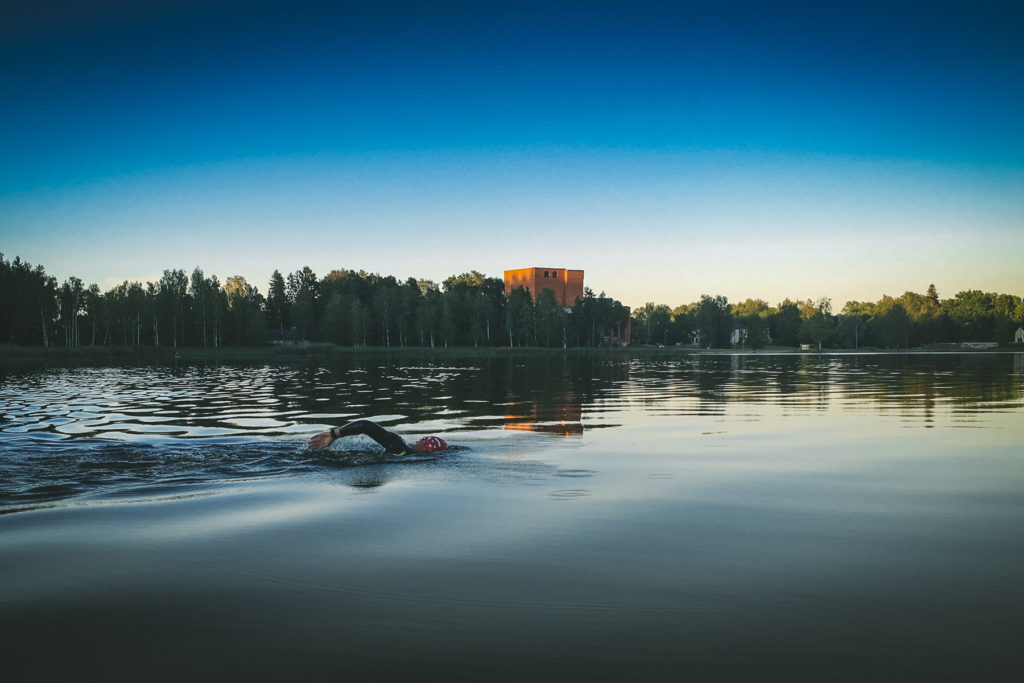 Gear is ready for the Tartu Mill Triathlon 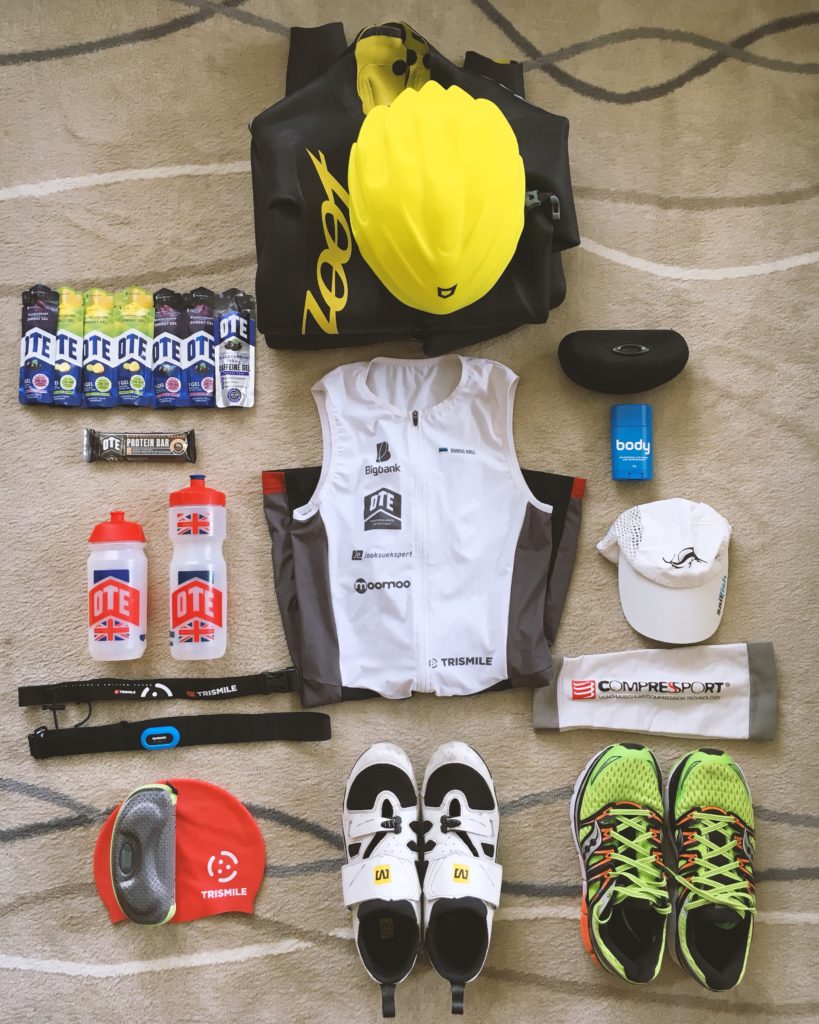 First km on the bike 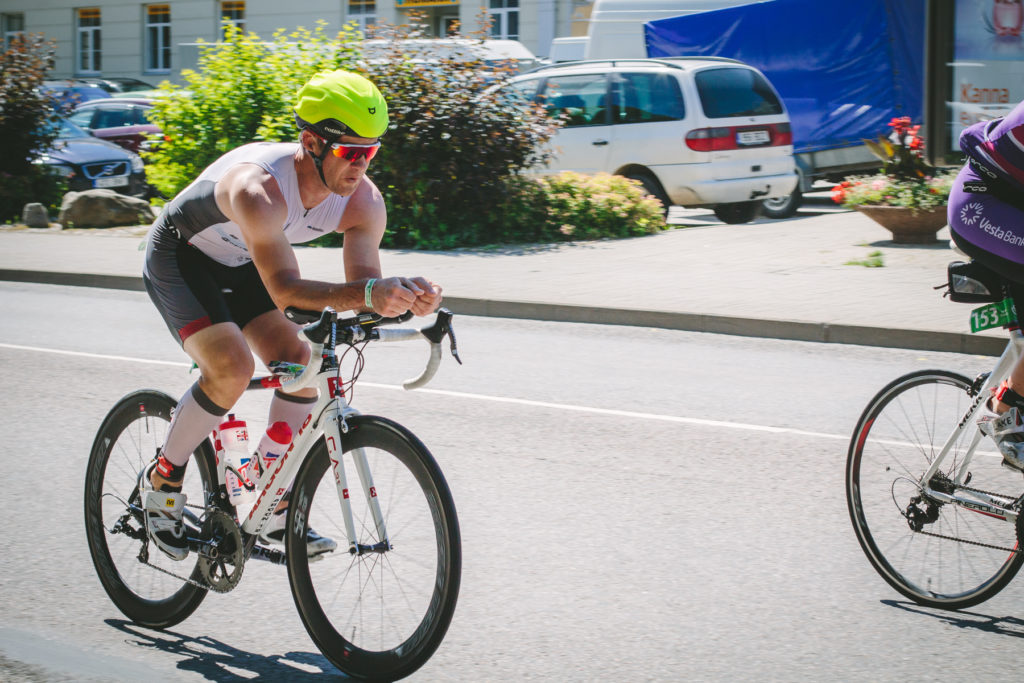 First km on the run. Feeling was not very good, it was difficult to get going 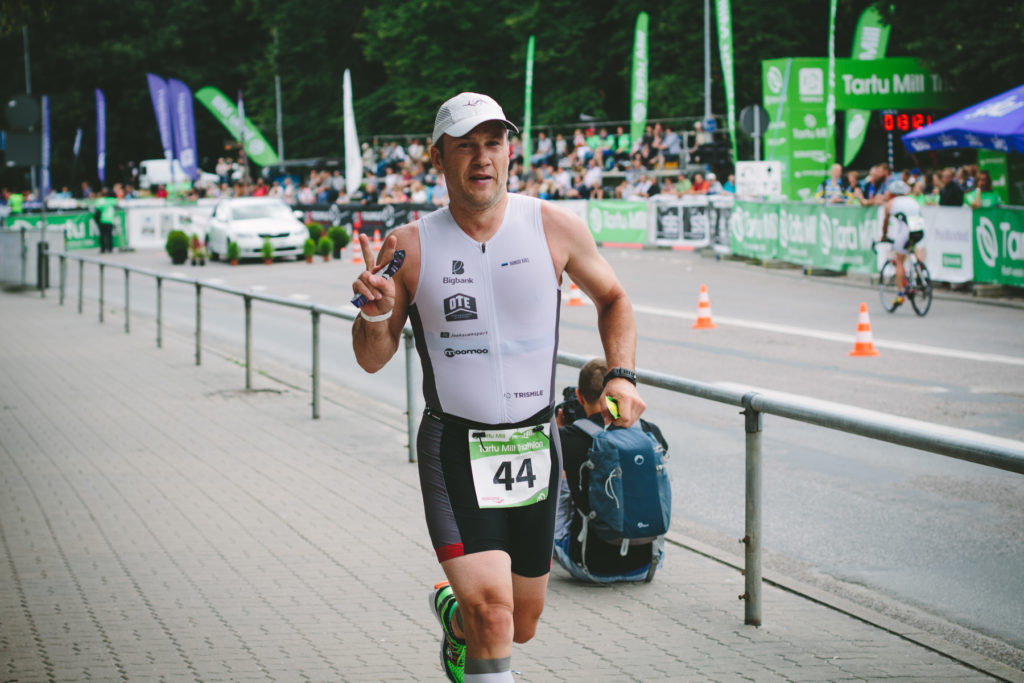 In the finish, not so tired and very happy 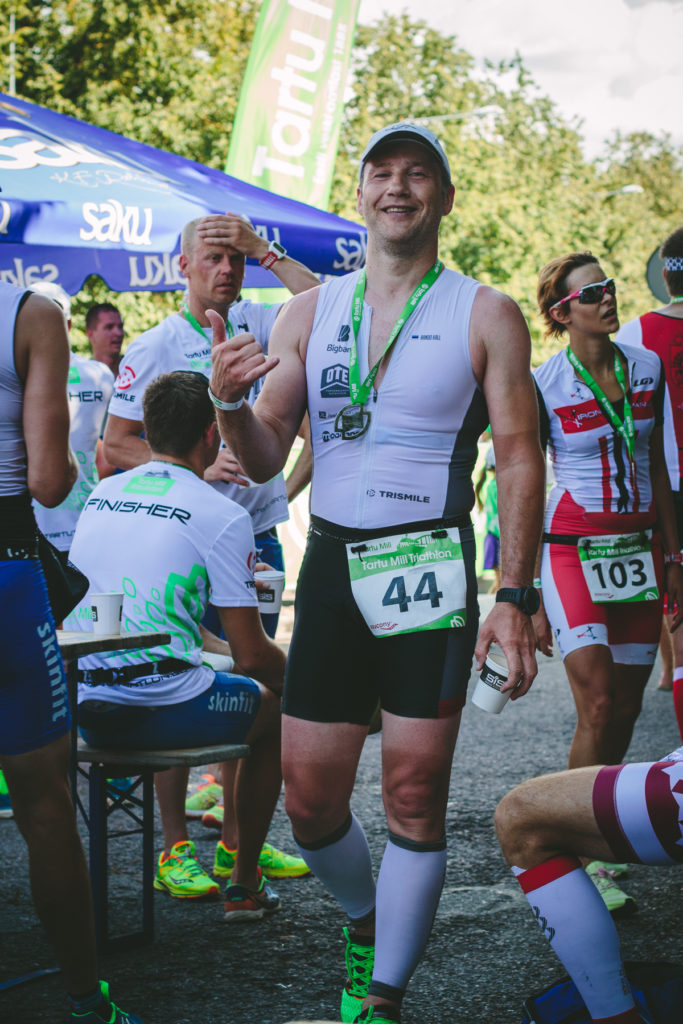 Stats from the run leg 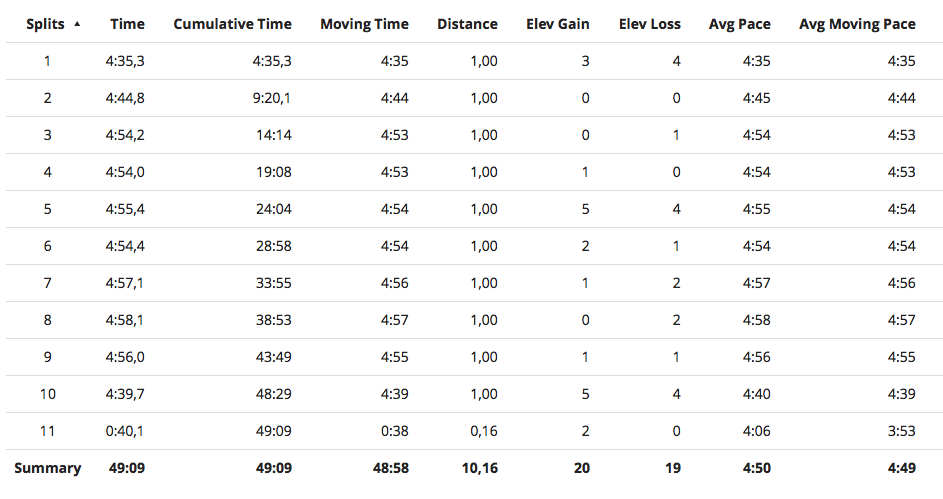