You are an IRONMAN!

The road to somewhere has reached an important milestone – I became an IRONMAN! But the road doesn’t stop here. I don’t know for sure where it will lead, but I’m certain that this lifestyle has caught me and I’m already thinking what should be the next milestones.

But first, let’s review the events from last week. Grab a coffee, make yourself comfortable and dive in.

The plan was to be in Mallorca quite early to familiarise ourselves with local conditions. Flight was on 19th and went smoothly. We arrived at our villa (Bonaire, ~5-7 minutes drive from Port d’Alcúdia) and started unpacking. Weather was nice and warm so we expected the race to be in really hot conditions. 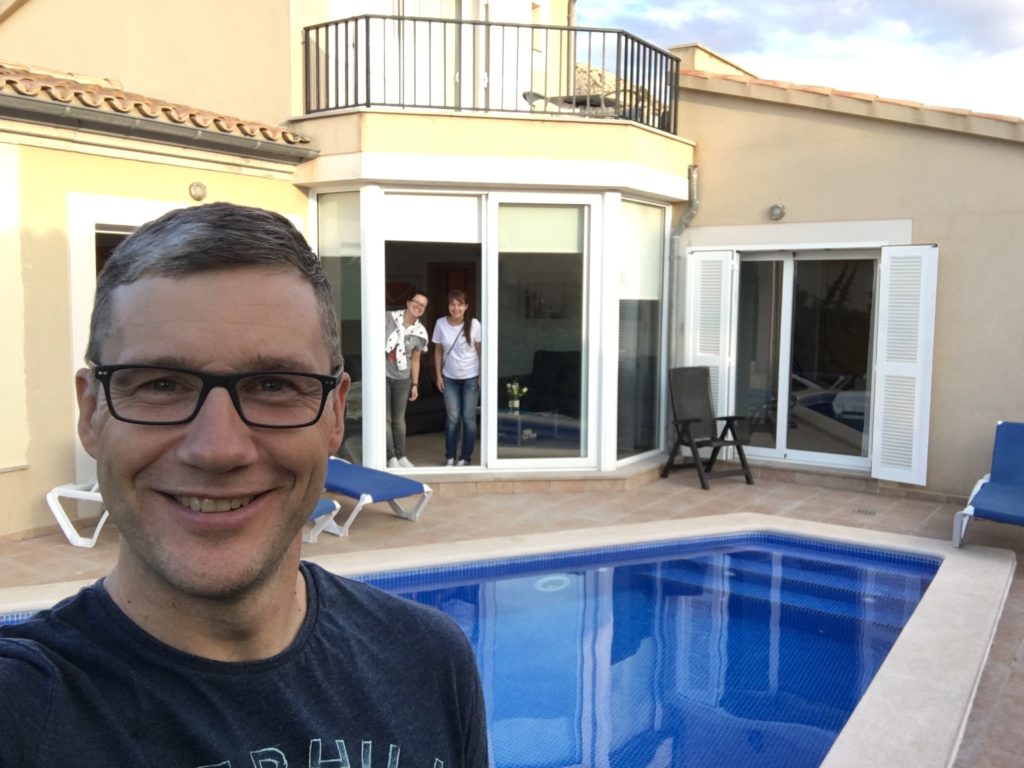 On Tuesday we went for a short bike ride to recce the bike course. What an adventure it was! We caught heavy rain, couple of punctures and basically most of us had to replace the both tires after this ride – the rain brought small pieces of glass onto the road and when examined later, the tires were like Swiss cheese! 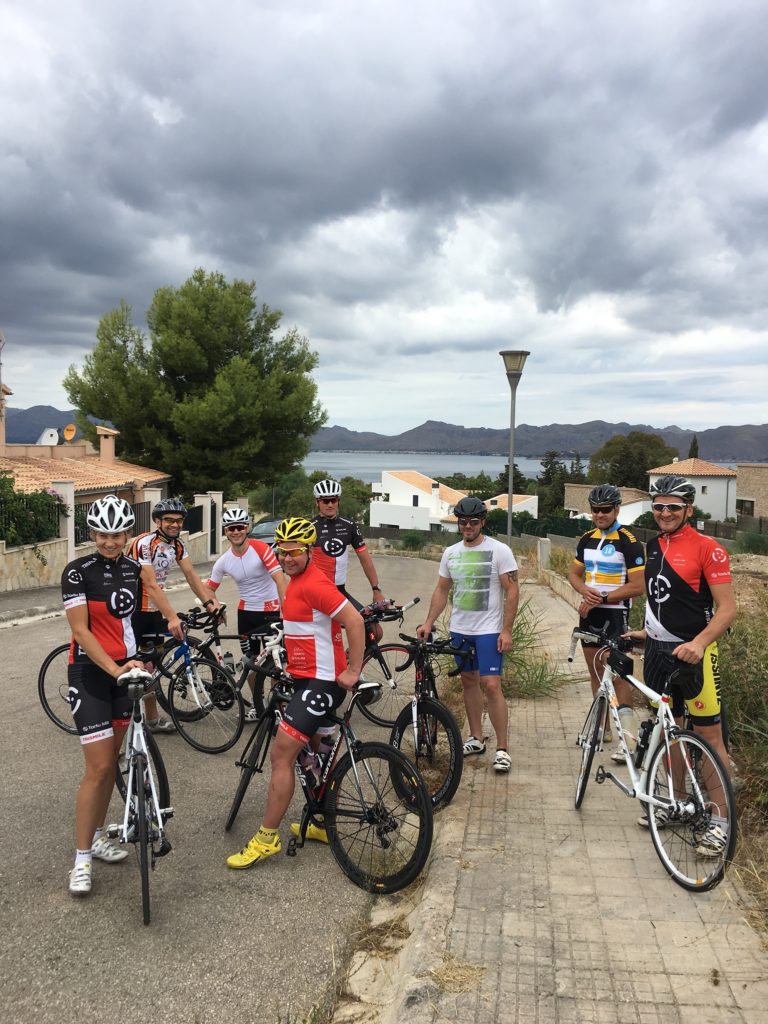 For me, on Wednesday and Thursday, the only plan was to have a short swim just to get acquainted with the Mediterranean Sea and salt water. I haven’t had a proper swim in the sea before! Fortunately again, everything went smoothly and I got rid of the scare. 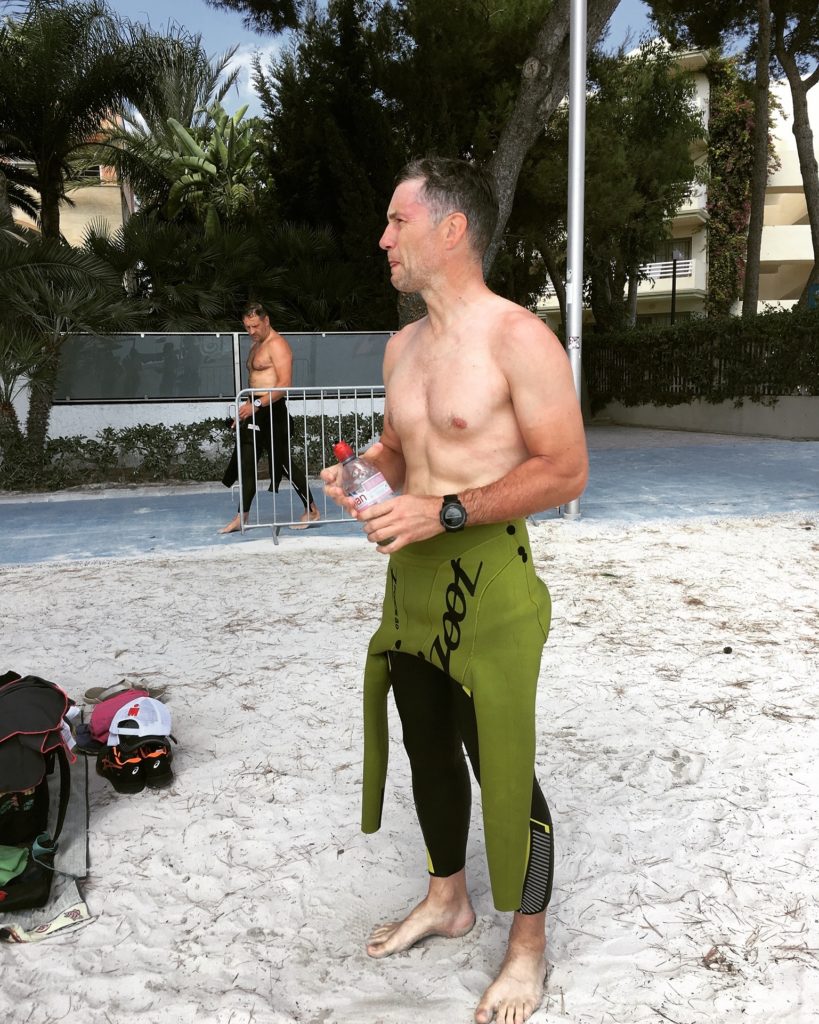 Next up – packing, race briefing and gear check-in on Friday. We decided to do the bike check-in quite late on the afternoon so the Transition Area (TA) was already packed with all those nice TT bikes! 🙂 Earlier, during the briefing we got the news that it’s going to be a non-wetsuit swim. Luckily I did a short swim also without the wetsuit so no real panic there. 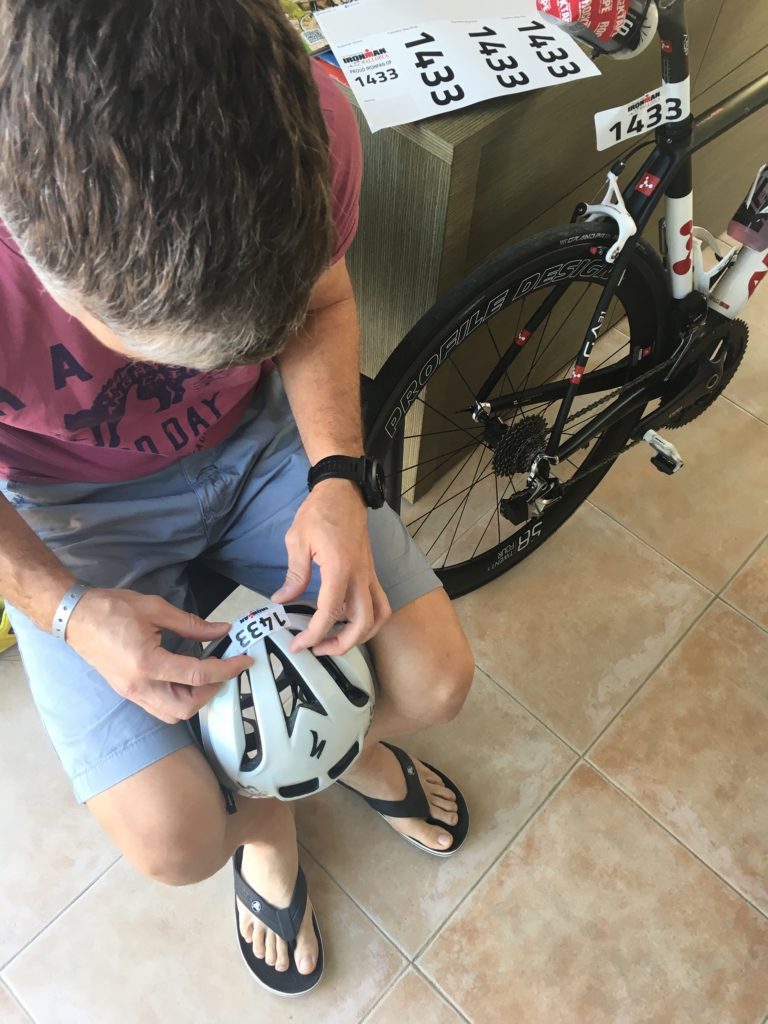 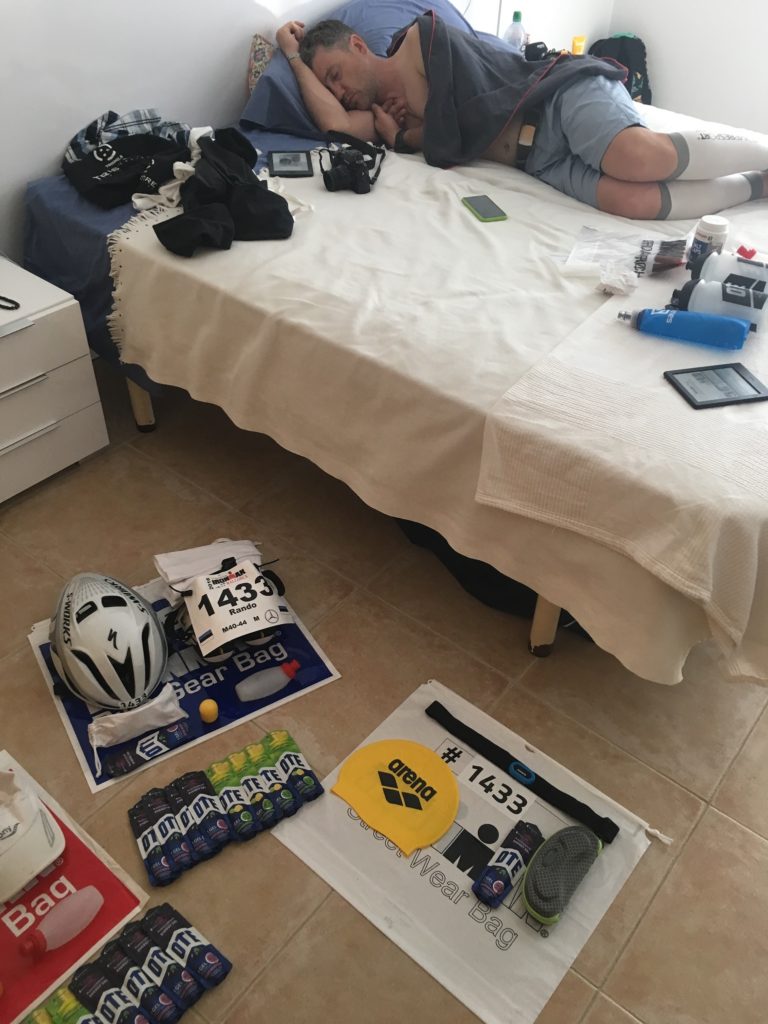 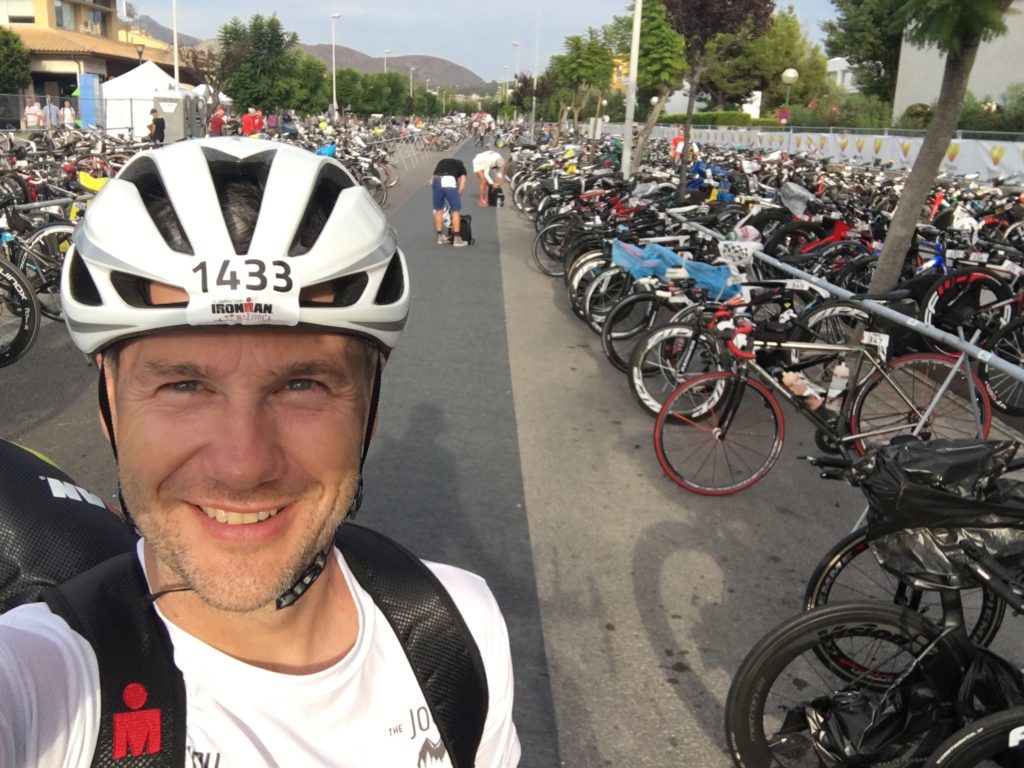 During the pre-race week I had no troubles with the sleep so I was not really worried if the excitement will kick in and I couldn’t sleep the night before the race, but none of this happened and I slept like a baby 🙂

Wake up call at 4:50, followed my usual morning routine. Night was OK, woke up couple of time but good 6-7h sleep overall. For the breakfast I had three slices of white bread with strawberry jam – my usual pre-race meal then put on my race suit and off we went. With a solid 45 minutes buffer before the closing of TA. And just when we arrived to the city, came the information (first from our travel mates, then official information on Facebook) that wetsuits are allowed! We headed back to the villa, grabbed our wetsuits and hurried back to the TA. I got to my bike 15 minutes before the TA closing time, but already the announcers asked people to move out from the TA! Quickly pumped the tires, put the bottles on to the bike and into the run and bike gear bags. Managed even to find the Special Needs bag for the bike leg and put two additional drinking bottles and three gels there.
Eventually everything worked out just fine 🙂 Final visit to the loo and then it was time to move closer to the starting area and put on my wetsuit.
During all this rushing I lost sight of Mari-Liis, thought that “this is it, I’m not going to see her before the start”. But fortunately we bumped at each other in the start area and we had the time for chat and last kiss before the start. 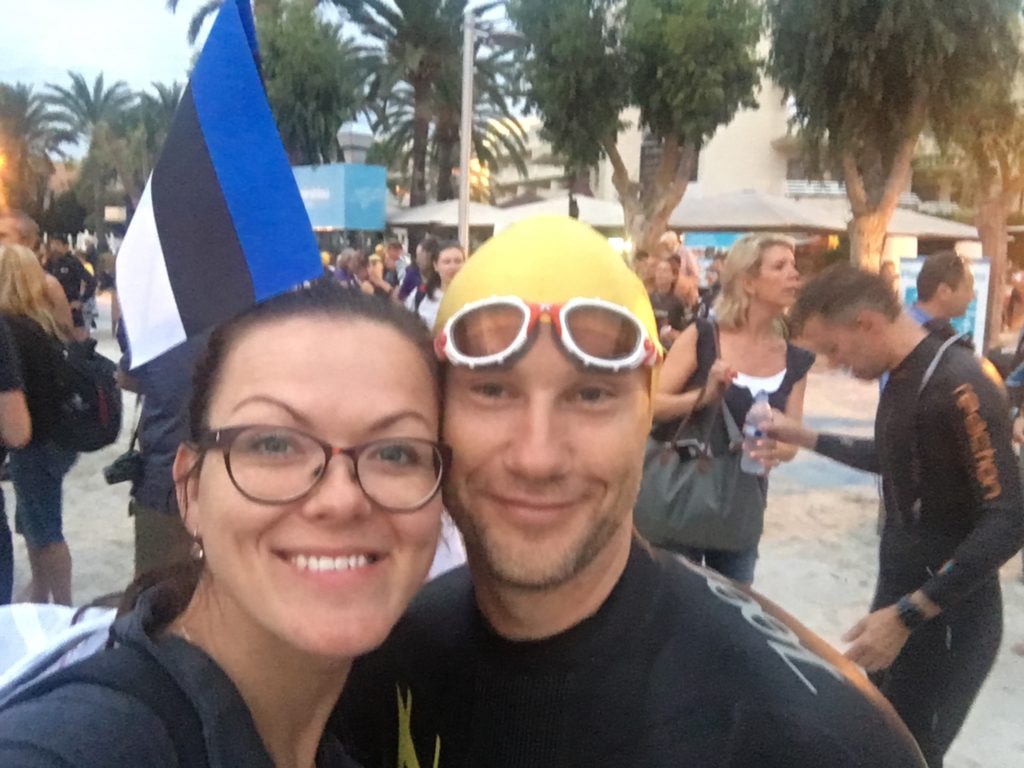 In the starting corridor I saw also Ilmar and Janek, we exchanged jokes and wished each other a good race.
Finally, when people with faster swim times started moving, I became really calm and thought that “now it’s the time to finally fulfil my dream!” and we rushed into the sea!

First couple of hundred meters I kept bit faster pace, since it was really crowded in the water! Constant kicking and grabbing and pushing and nudging. I got kicked in the face, water went inside the goggles but fortunately not a lot and not in the eye 🙂 Got rid of it while we had the Australian exit. Overall visibility was very good, buoys were easily spotted so no troubles there.
Already quite early in the race it became clear that wetsuit may have not been the best idea – it was so warm! My average HR was around 10-20 bpm higher than usual. Main concern was that if when HR goes way up then I would cook myself quite badly and during the bike it would be really difficult to keep the HR in a proper zone. During the Australian exit I saw 170 bpm on my Garmin, thought “oh well, nothing I could really do at the moment” and stopped worrying about this.
After the first loop I saw also Mari-Liis, high-fived her and rushed again in to the water. 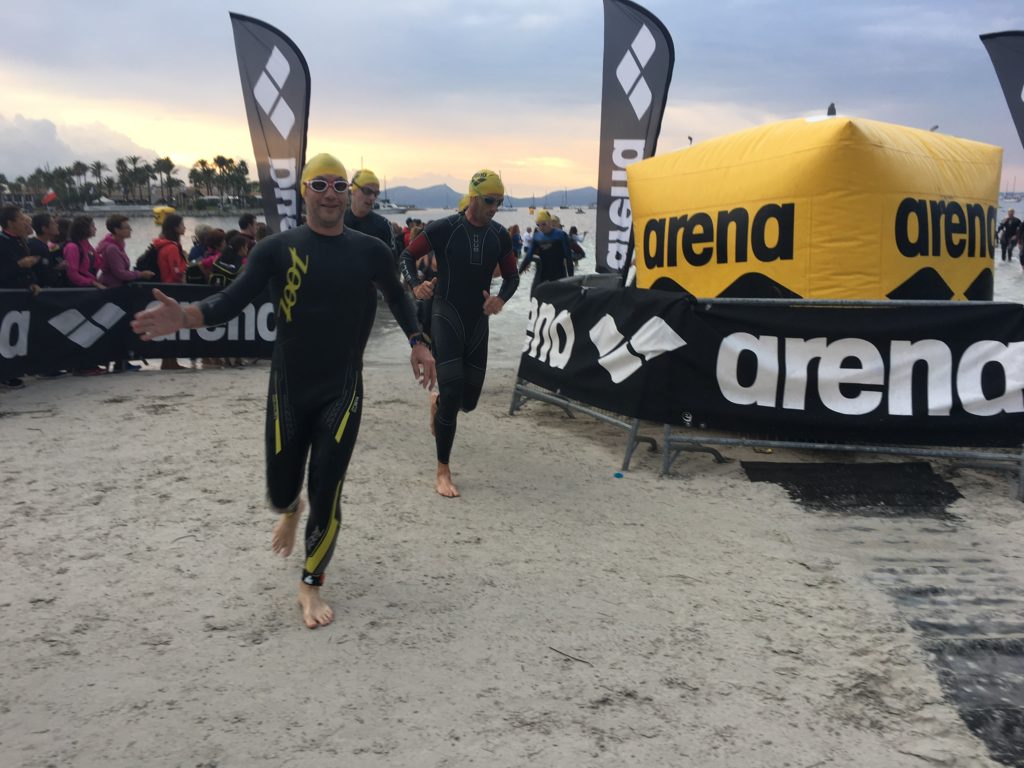 Second loop was shorter and it was not so crowded anymore. Took it easy, didn’t even think about those two mouthfuls of seawater that I had swallowed earlier 🙂

When running out of the water I saw Maret. We ran together to the T1 and had a small chit-chat along the way. 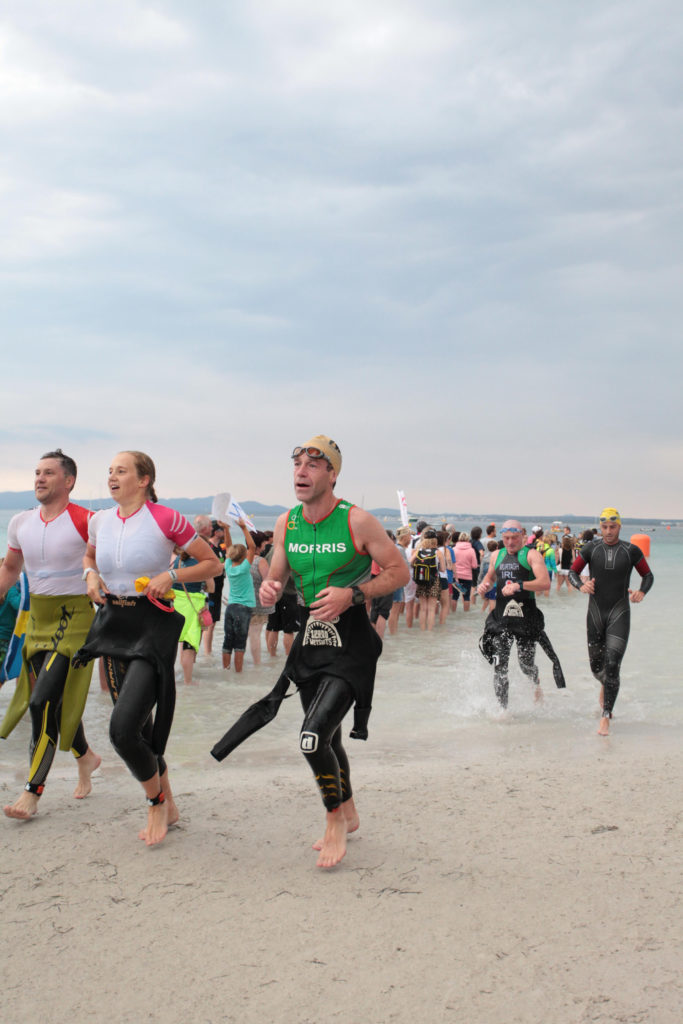 It was really good that the organisers provided bottled water to all the athletes before the TA – my mouth was so dry because of all this salt.
Found quickly my bike gear bag, washed and dried the feet, put on the socks, bike shoes, helmet and ran. Didn’t rush, took it slow and my T1 time reflects this very well – 8:17 🙂

As soon as I got on the bike, all the trouble about being cooked during the swim disappeared. HR was exactly there where it supposed to be and I probably even held myself back too much during the first part of the bike leg 😀 Mari-Liis and Mari were cheering and they shouted that Tõnu was 16 minutes in front of me. He was doing really well. 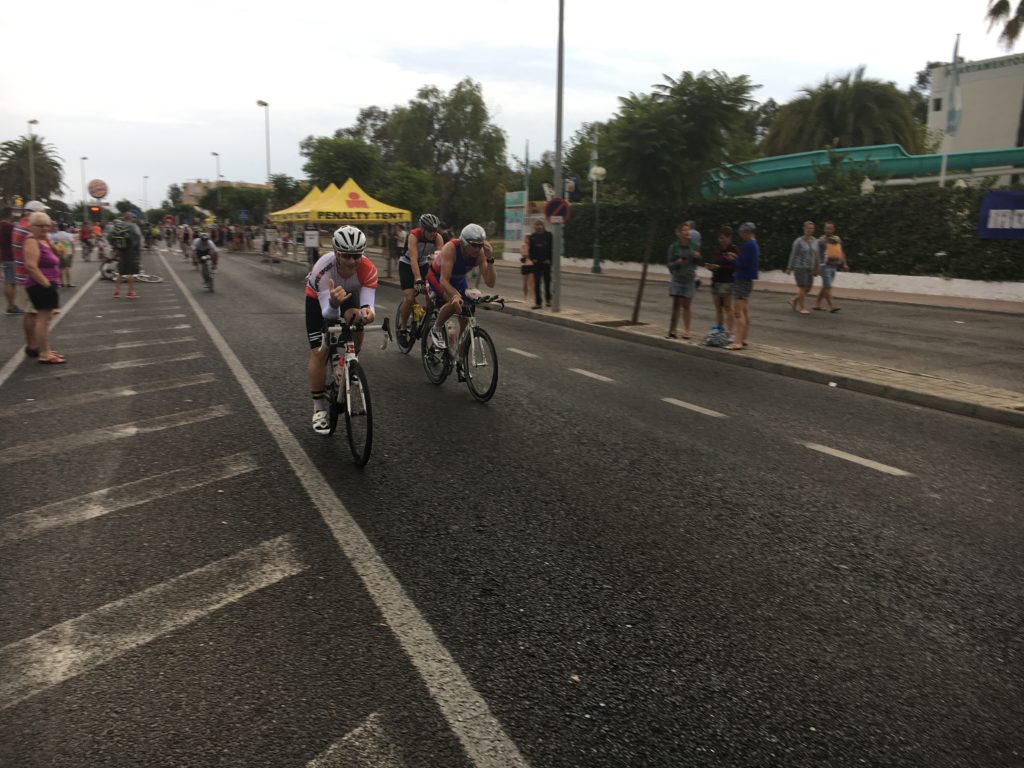 The first part was enjoyable – nice roads, good weather (not too hot), rolling hills and nice scenery. No real issues, nutrition plan worked like a charm (one gel and one salt capsule in every 30 minutes), I saw 3 crashes but managed to keep myself out of troubles. Since it was my first IRONMAN, I just tried to enjoy every minute of it.
End of the first loop took us back to Port d’Alcúdia and then we were heading towards the Pollença – long straight roads and wind before hitting the mountains! Again saw Mari-Liis and Mari with large Estonian flag – much needed energy boost from them!


I had consumed almost all sports drink and the Special Needs station came exactly at the right time. Helpful volunteer found quickly my bag, I exchanged the bottles and grabbed additional gels.
Followed quite uneventful ride until The Mountain! At least for me the climb was hard – it was long, hot at first then followed by really heavy rain (during downhill sections it was so cold that I couldn’t move my fingers and I took descent part and hairpins maybe even too carefully)! The rain itself I think was on the positive side, it suited me fine and kept from overheating.
It was probably the hardest climb I’ve ever ridden (definitely need to work on that), but at least the views were stunning 🙂 Average speed before the climb was 33 km/h, and on top of the mountain it had fallen to 30 km/h! 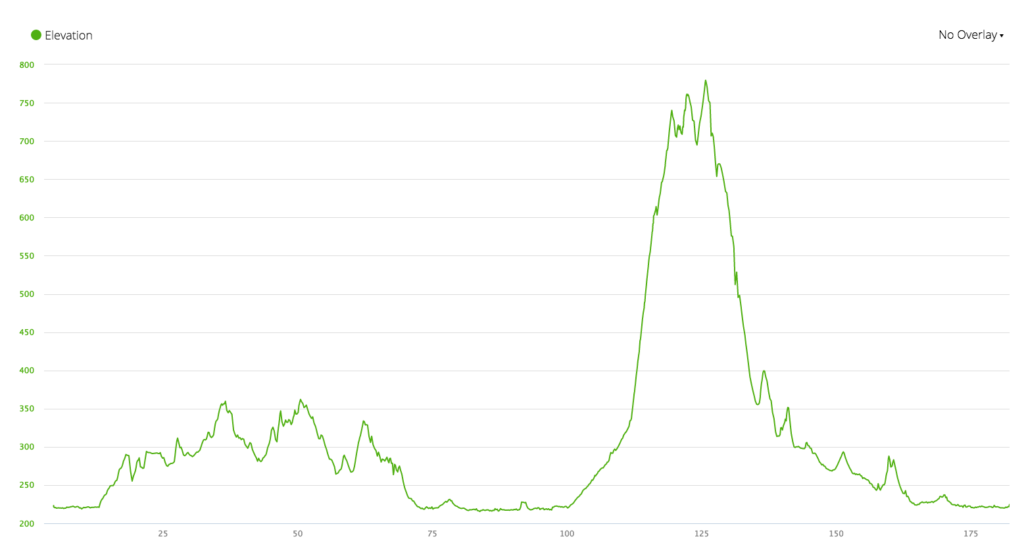 Tõnu had problems before the climb so I managed to catch him quite soon after the descent. After the mountains again nice familiar roads and trouble-free ride back to the TA.

To conclude the bike leg – took it relatively easy (hence not quite happy with the time), the climb was harder than I had anticipated and weather plays really big part here in Mallorca – official time 5:42:59, distance on my Garmin 178 km.

Racked my bike, grabbed the run gear back and ran to the tents. Because of the all rain and wet shoes, the feet were not in the best shape. Tried to dry them as much as possible, put on the new socks and compressions, stuffed my shirt pockets with gels and ran away. T2 was also the first time I visited the loo. T2 time – 7:26

With the first meters of run it became clear that I can’t run with all those gels stuffed into the shirt pockets – they were bouncing up and down and it was difficult to concentrate. Fortunately, as planned, Mari-Liis waited me just outside the T2 – there was the first Aid Station and Special Needs station. I gave her all my gels and new instructions. Kept just two gels for myself in one hand and Salomon soft flask in other hand. 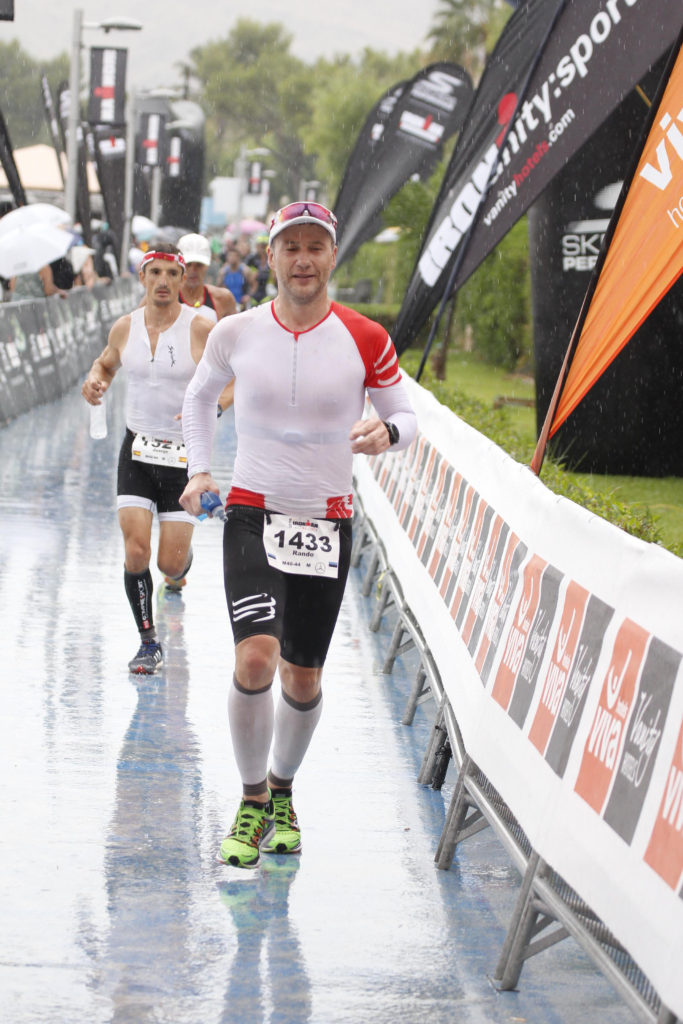 Since the weather was not as hot as we anticipated (first two loops I ran in the rain and the road was covered with large puddles), I actually didn’t need my own drink and after second loop I ditched the bottles and kept just the gels. Nutrition wise again I followed my plan to take a gel and a salt capsule in every 30 minutes and it worked perfectly. In Aid Stations I took water – Cola – water and it also worked out nicely. It was probably on the last 10km when I felt that “no more gels today, I can’t take them anymore”, but continued to take them nevertheless.
After the first two loops everything was new to me – I had never run more than 23km. 🙂 Probably the third loop was the hardest and I constantly had to tell myself not to start walking and keep running. The pace chart also reflects that very well. After 33-35km the legs felt actually better and I started to rise the pace again. 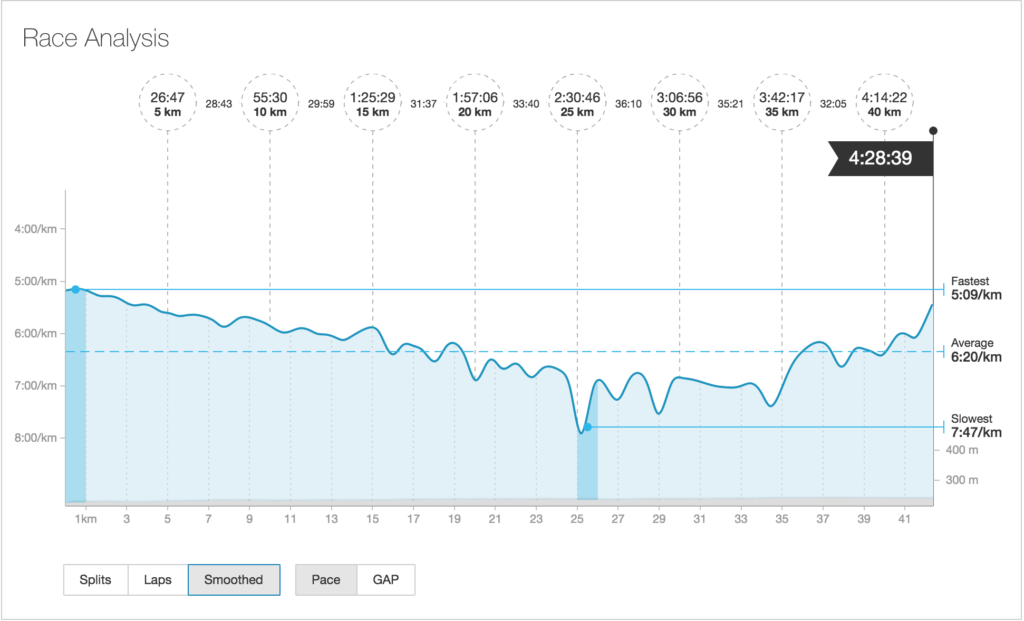 Since the run was in the city, there were people cheering practically in every part of the loop, especially around the seafront and town center. The shouting and music and people – it all helped to keep the spirit and motivation up. And during every loop I also saw my mates from Estonia, both, on and alongside the run course! I knew that after ~20km it will become difficult for me and I just need to keep going – hips upfront and elbows back 🙂 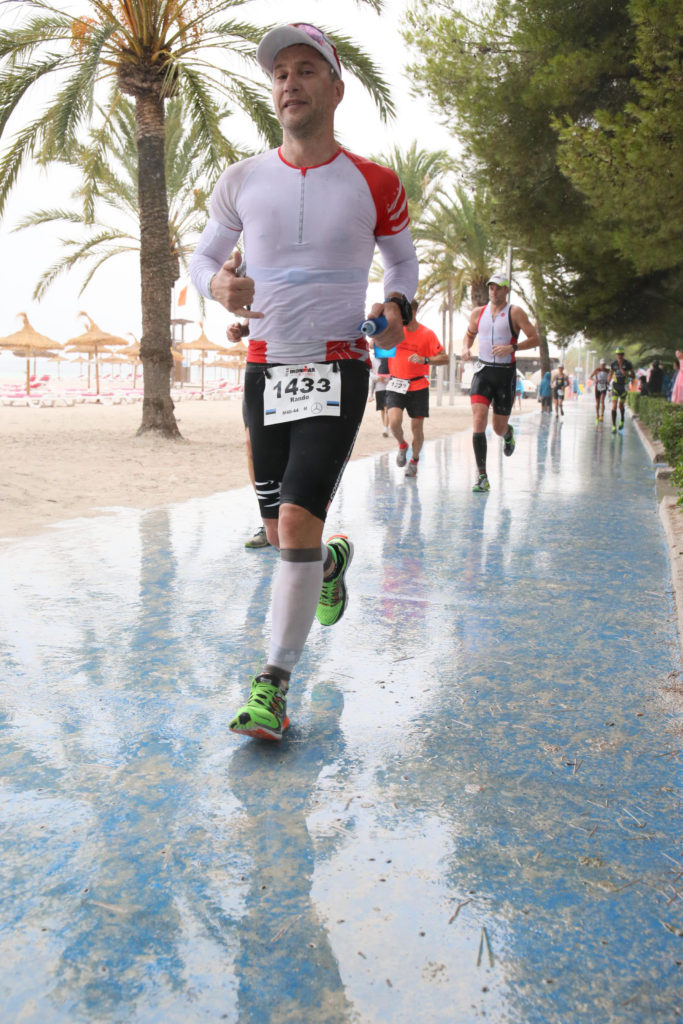 The final kilometers filled my empty mind again with different thoughts, I felt extremely well and emotions were high. While running the last 200m in the finish corridor I just couldn’t believe that I got this far, I saw Mari-Liis, high-fived the random crowd and just felt happy! And then came the famous words – “Rando Kall, You are an IRONMAN!” 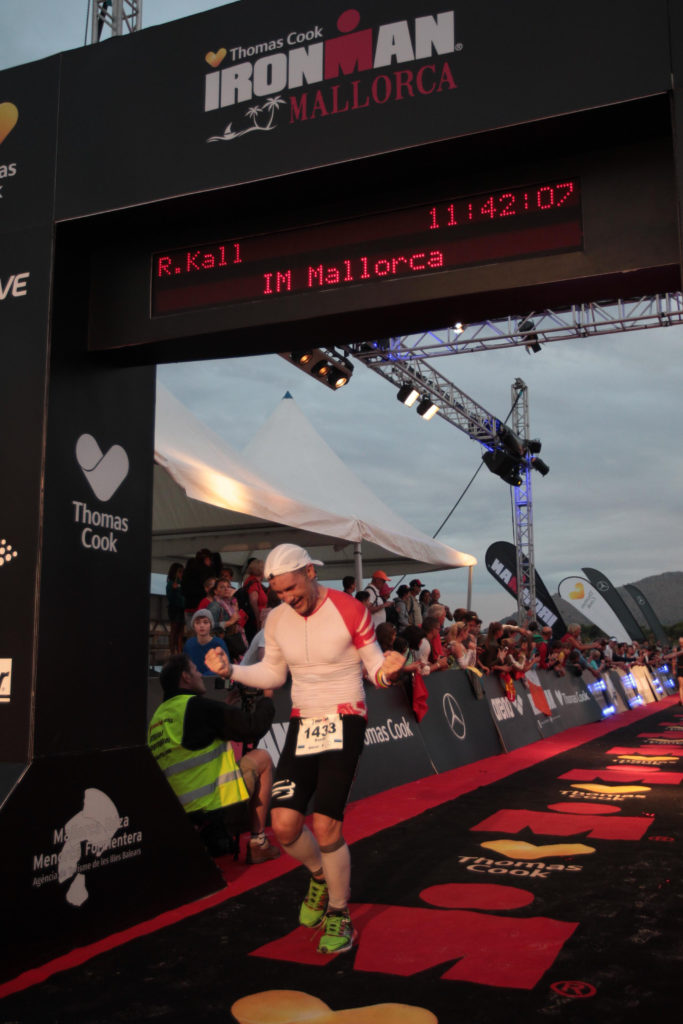 I felt tired and happy, empty and complete, got the finishers medal and T-shirt, met with mates, changed the clothes, ate and had a Fanta. I had done this!

Anyone interested in numbers can see my race statistics on Garmin Connect, on Strava and on IRONMAN website.

And of course I want to thank my wife Mari-Liis for supporting me during these months and during the race, my family and friends! 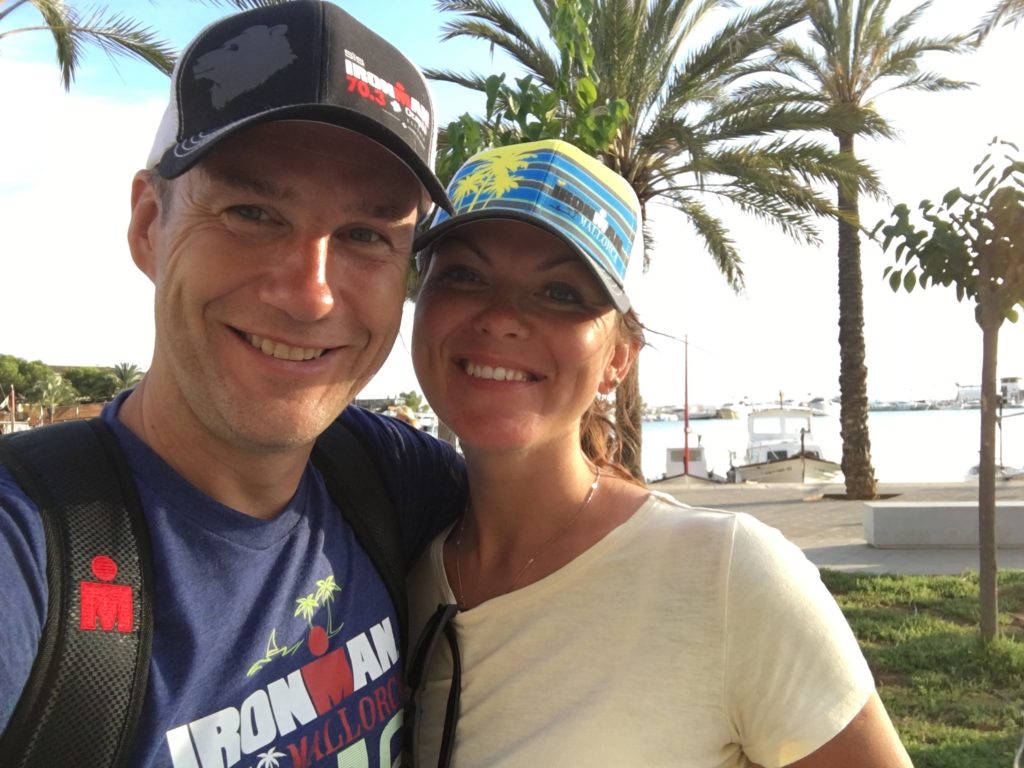 Special thanks goes to my supporters – OTE Sports, Jooksuekspert, Bigbank and Moomoo Cycling!