Let me get this off my chest – it is difficult to keep consistency when your A race is so close to the end of the season. Period. Last couple of weeks I have skipped a few shorter sessions, last week didn’t swim at all. What can I say. It’s difficult.

On a positive note, I have done couple of longer sessions and my overall “hours spent training” is quite OK. I did two over 20km runs, as promised a month ago. One was 21km and another, just week after, a 22km run. Overall feeling and also the recovery were definitely above average.

Second run was preceded by the Gran Fondo Estonia just day before and I actually felt pretty good during the run. Of course it got tough already after 10km, but quitting or any other negative thought never crossed my mind.

And that brings us to this long day on a bike 🙂

As I remembered from last year, there was two difficult spots for me then – to get going again after fuel stop on 100km mark and somewhere around 140-150km mark where the mood went down and hurt came. 🙂 So it was interesting to compare!

At first, everything went as planned, early breakfast, nice and warm morning and then first emotional setback – someone slipped when putting her bag in to the trailer and grabbed my bike during the fall. The result, scratches and chip in the lacquer on top tube. Huuuuge emotional loss 🙁

Fast forward to 100km mark and fuel stop. My plan was to test the nutrition for the Ironman so I skipped the soup and stuck to the gel and banana. Fortunately with nutrition everything went very well – I took one OTE Sports gel in every 30-40 minutes, and these kept me going for the whole ride.

140km into the race and the highest point on the course. First time used front derailleur and then it broke down. As the mechanic identified later, some bolts got loose and the tail fell on the largest chainring. I used some “excessive force” on the tail and got chainrings free and moving again. By that time the peloton was long gone and the chase begun 🙂 As I identified later from the Garmin graphs, it took me ~6,5km’s to catch the peloton (from 141,17km to 147,75km)! Oh joy when I finally reached the group 🙂 Couple of kilometers for the recovery and I was OK again.

Around 180km mark the peloton had second quick fuel stop and I noticed that my front tire was almost flat! This time I was in luck, group was not moving and I just had to be really quick. After the fastest tire change of my life I even had 30 seconds left to fill my bottles with OTE Energy drink 🙂 When we got moving, I had to “adjust” the front derailleur, again. This time I managed to do this while on the bike.

Rest of the race went smoothly and even the last sprint uphill over cobbles was good fun.

And here is the comparison between this and the last year 🙂 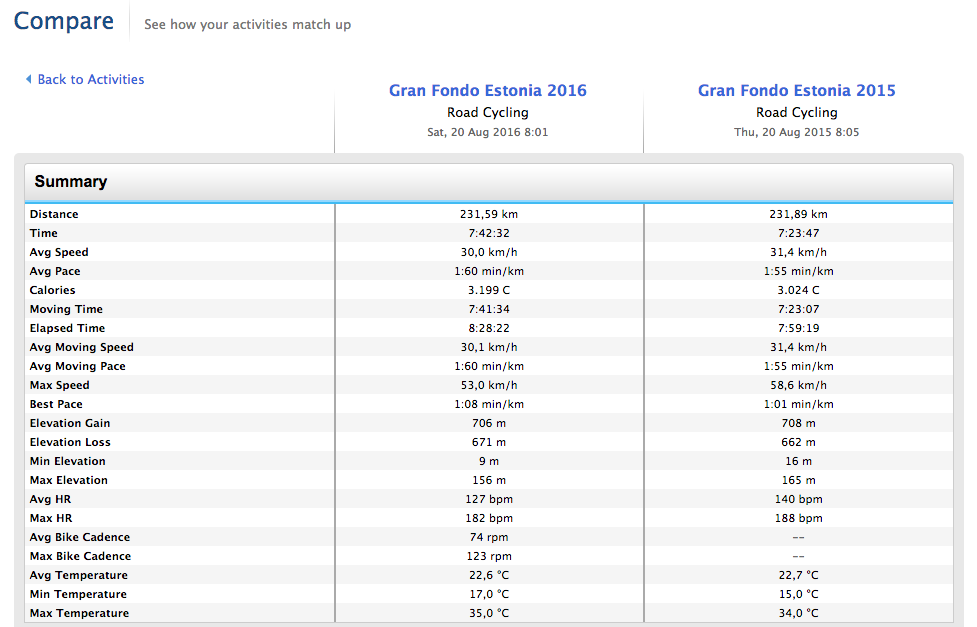 So, what the coming last few weeks will bring? I definitely have to do couple of swims despite the quite cold weather. At the end of this week, one long ride and long hike, three weeks before the race I’ll start taper with last long ride before the IRONMAN Mallorca 2016. And in a few days I should receive a package with the new groupset for my bike, can’t wait! 🙂

Nothing is more certain than the defeat of a man who gives up. -George Sheehan #running #triathlon #training #quoteoftheday #roadtoironman #motivation